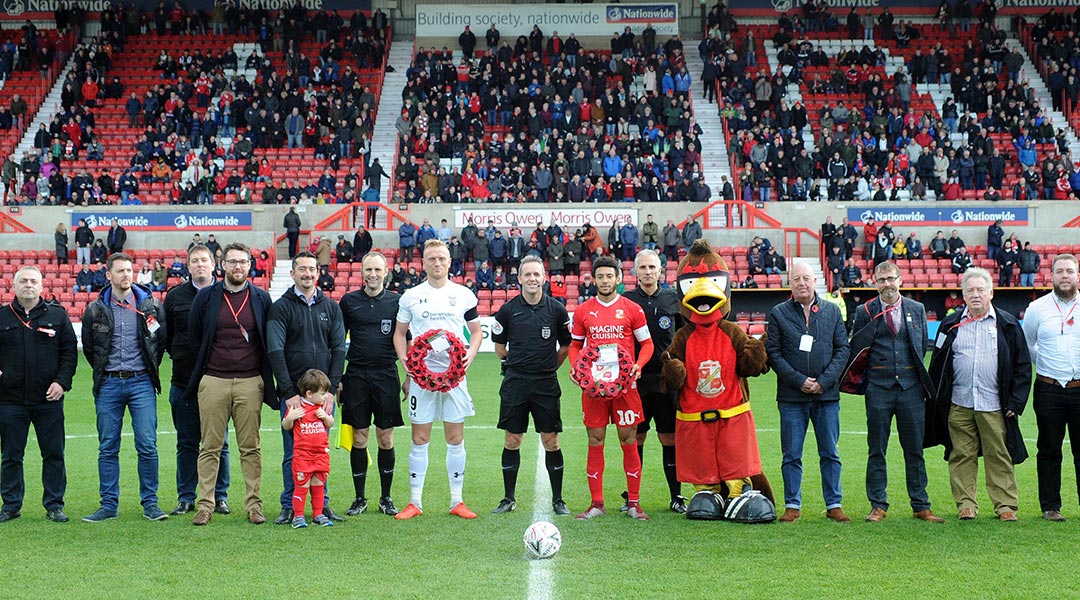 On November 11th, marking the 100 years since the Armistice, Hi-Tec Washrooms sponsored the FA Cup first round game between Swindon Town FC and York. The remembrance day game began with a rendition of the Last Post, followed by a minutes silence.

It has been a fantastic opportunity to sponsor Swindon on such a meaningful day. The tributes paid to those who sacrificed their lives were wonderful, and to see all the fans and players come together to pay their respects made it a very memorable occasion.

Remembering the fallen during the Centenary

Alongside volunteer fund-raising for the Royal British Legion, the Swindon Town team also showed recognition for the fallen with the 18 players within the day’s squad wearing numbers one to eighteen. The home side were also happy for the end result of the match; which saw Swindon Town go through to the next round of the FA Cup.

Hi-Tec Washrooms are enormously proud to be able to support the team on such an occasion, and will be sponsoring the team once again at their next FA Cup match against Woking on the 2nd of December.

Providing the solution for UK Public Toilets and Entry Systems

We install solutions bespoke to your requirements, with installations for small town councils, and larger projects including automatic public toilets in London and other cities. Whether you're thinking of ways to improve your local area, solve a public urination problem or generate money from paid toilet entry systems, get in contact with us now to discuss your project and get a free planning consultation.

"Without the services of Hi Tec Washrooms we wouldn't have been able to install our Uri Lifts. Hi Tec gave invaluable expert support; finding suitable locations, engaging with local residents, advising on the best approach & most importantly overseeing the installation of the Uri lifts."

"We'd suffered from our entranceway being used as a urinal by young males. Since the installation, we've had much less urine on our doorstep. I suspect this outcome has been shared by other premises with doorways opening in this area. The sight of queues forming to use the facility is a cheerful one."

"The Uri lifts have had an excellent impact in the community, providing a service for visitors and reducing anti social public urination. I would have no hesitation in recommending Hi Tec solutions to carry out the installation of any kind of washroom facility."

"The urinal itself is attractive and seems integrated into the space. It would be good to see more in operation. Most householders are initially averse to the thought of one near them, but I believe that the initial opposition of residents has changed to approval."